Over the Rainbow Bridge

Saffron, a 3lbs 13+ year old Pomeranian, came to us as a cruelty case from a local county shelter. She was severely malnourished and neglected, and suffered more than any dog should have to during her life. Unfortunately, she wasn't able to recover from the damage her former owners inflicted, and passed away a few days after being adopted by one of our favorite sanctuary moms, Tricia. Tricia made Saffron home-made meals, kept her warm with soft blankets, let her know she was loved, and held her as Saffron passed over the rainbow bridge in the safety and comfort of her home. We wish Saffron could have been with us for a lot longer than she was, and her passing deeply effected everyone who knew and loved this little girl. She is now running freely with Cayleb and the rest of the pack, happy and pain-free. 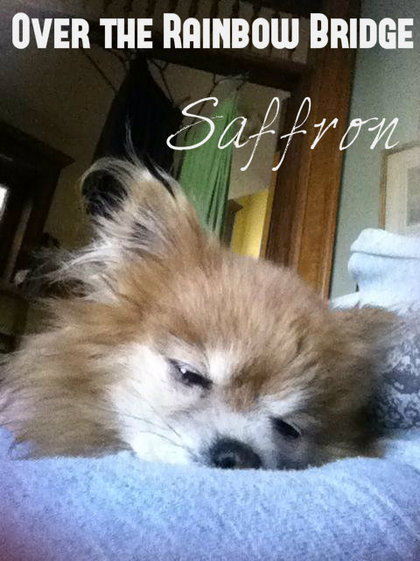 Teddy aka "Beef", passed away after living some comfortable, carefree, and very, very happy weeks with Jack, Peaches, Joji, and their awesome mom and dad. Sadly, Beef began to bleed from the nose the morning of the 16th, and though we all hoped it was just a nose bleed, we all feared the worst. And our fears were confirmed, Beef had a previously undetected tumor in the back of his throat that had spread to his nasal cavity. The decision was made to let him go before his quality of life deteriorated, and he passed peacefully, surrounded by those who loved him, with the knowledge that he was loved. 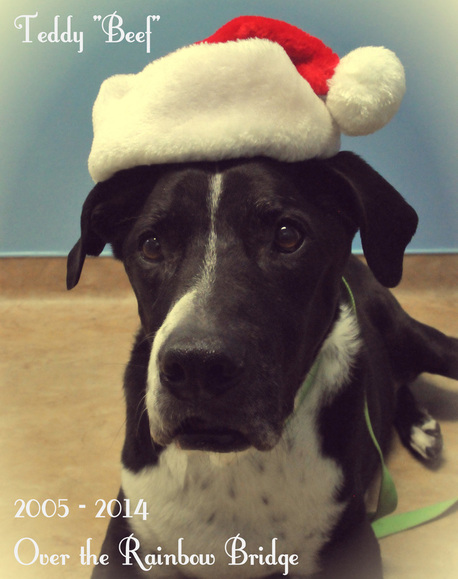 Dudley, formerly known as Sir Oscarlott, passed over the rainbow bridge on Sunday, August 18th, with his family beside him. He had become very suddenly ill, and upon a visit to the vet, it was determined that Dudley would have only a few days left. His family brought him home and spoiled him; letting him eat whatever he wanted, whenever he wanted. Alyssa, his teenage mom, took him out to the park in a wagon, and would lay with him in the yard and soak up the sun. They were each other's best friends. When Dudley stopped eating, which was one of his favorite activities, they knew it was time to let him go. He is greatly missed by all. 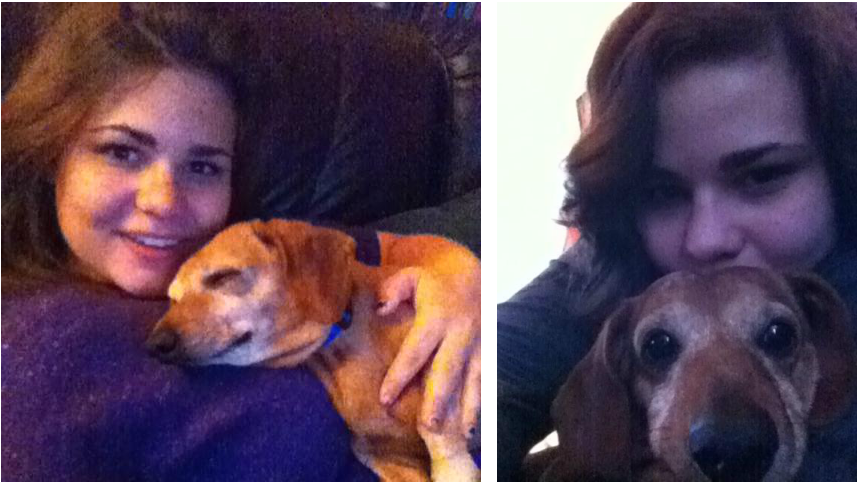 We are very sad to announce that Elli passed away early Monday morning, joining Cayleb and the rest of the pack over the rainbow bridge after almost two wonderful months with us. Elli was a 12 year old German Shepherd who came to us from a local humane society after spending more than half of her life tied in a backyard. Despite what she went through in her past home, she always had kisses to give to anyone and everyone around (both humans and dogs alike), and loved, above all, spending time with her people. Elli did have severe health problems, including significant spondylosis, chronic pancreatitis, and spleen cancer. But she was always so sweet and gentle, no matter how bad she was feeling. Until we meet again Elli, we all miss you.
Duke: 2000 - June 19th, 2013

"As you can tell from the photos, Duke has become a valued member of my dog family. It is with great sadness that I share with you today that Duke will be laid to rest. He truly made his last weeks his best, from tail wagging and chasing toads, to offering me protection during a water balloon fight. His breathing has become labored and the pain medication isn't enough anymore, I am so very grateful that I am able to offer him a peaceful painless goodbye. He will be waiting for me one day at the rainbow bridge. Thank you to everyone who helped make his last weeks his best." -Duke's Foster Mom

Due to financial hardship, Duke was surrendered to us, as a sanctuary dog, by his owner. He came to us with toenails so long that he couldn't walk, but those were quickly clipped, and he was happy to be able to move around a little better! He did have mobility issues due to significant swelling in his back legs, caused by a rare golf-ball sized tumor on his lung. Though he was only with us for a month, his foster mom, and his foster siblings, made it the best month of his life. 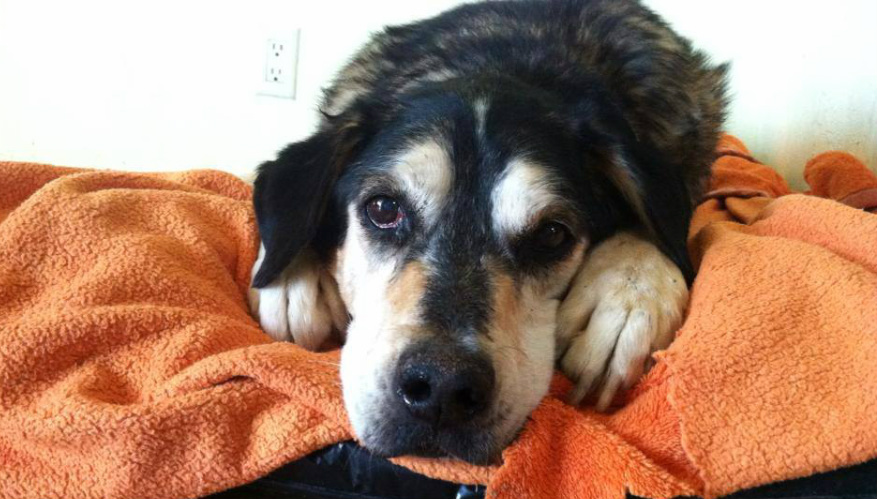 "She thinks she’s still a puppy!  Loves to play fetch and even run through water after the ball.  Madison has lived with kids of all ages and is likely to do well in a home w/other dogs.  No cats, due to lunging and barking at the cat kennel during behavior evaluation.  Madison’s first owners surrendered her after 8 years due to allergies. Medical wise, Madison does have some lumps (see med report).  Due to limited resources, we cannot diagnose, but she is not in pain and we feel she still has a lot of quality of life in her! From my understanding, today is Madison’s last day." -Shelter Staff

Madison came to us as a terminal sanctuary dog from a local animal shelter. It was her last day, and she was already scheduled to be put to sleep when we received the email. We placed her in a foster home where she was able to play in a large backyard with the tennis ball, interact with many people, and be loved. Unfortunately, her health declined quickly. After a week of happiness and comfort, she stopped eating, and began to shut down. Her sanctuary parents made the call, and she went to the rainbow bridge peacefully, with her new family beside her. 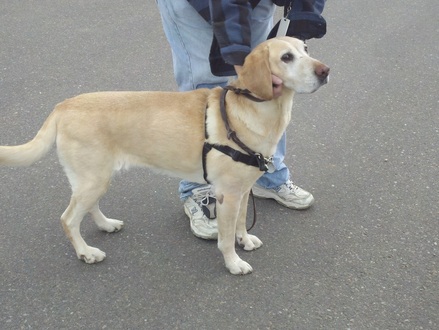 I found Cayleb, the dog who started it all, while scrolling through petharbor. An eight year old German Shepherd/Chow with no name, a bad intake photo, and an intimidating (if not downright scary) kennel manner, I was, of course, immediately drawn to him. Maybe it was me thinking "if I don't take him, nobody else will" or something else, but whatever it was that helped me make the decision to take him home, I am grateful to it, for that decision gave me one of the best companions I've had.

Upon arriving at what would be his forever home, he found himself a shadow in the form of my little black poodle who, despite being skittish around all other dogs, adored Cayleb and would trail after him for hours on end as they explored to backyard, chased some cats (until they got swatted at which point they would graciously accept defeat), and slept on the porch away from the summer sun.

His regal looks attracted the attention of many and his gentle, loyal, and gracious spirit gained the affection of everyone in the neighborhood, who would always stop to say "hello" on our regular "trots". And with each compliment on his ever improving coat and new muscles, he would perk up and look prouder and prouder.

Cayleb was enjoying his new life, and everyone at my house was enjoying the newest addition to the family. Unfortunately, Cayleb's health began to decline very suddenly. Upon taking him to the vet, a previously undetected tumor was found in his liver, and we made the tough decision to let him go.

Loosing Cayleb was hard, but we decided that his legacy deserved to be carried on. And what better way to continue it than to rescue the many senior dogs waiting for home in shelters, his "kindred spirits"? Thus, Cayleb's Kindred Senior Dog Rescue was born. 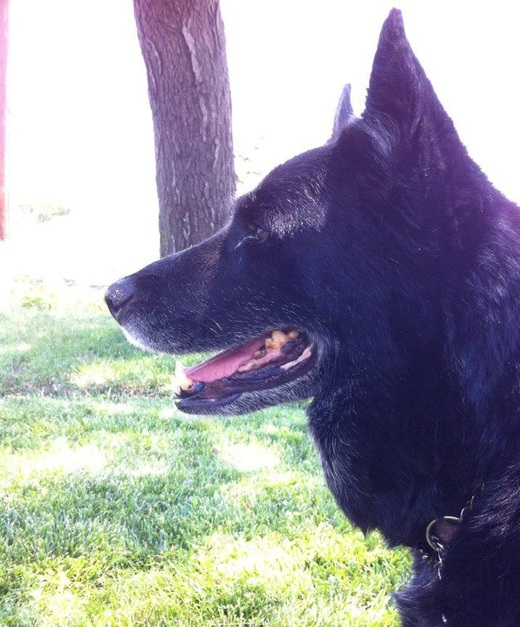